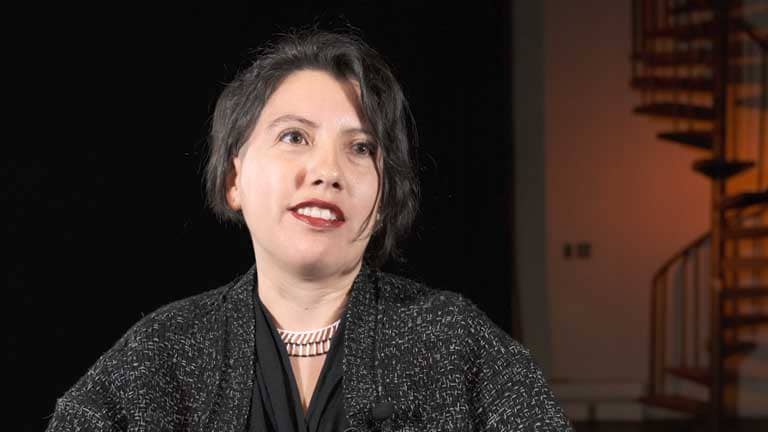 Tania Lizarazo is an Assistant Professor in Modern Languages, Linguistics and Intercultural Communications at UMBC. Her research interests include digital storytelling, Latin American cultural studies, transnational feminisms and performance studies. Initially exposed to digital storytelling as a PhD student at UC Davis, Tania collaborated on “Sexualidades Campesinas”  with LGBTQ members of farm working communities in California’s Central Valley.  Her article on the project discusses ethics, collaboration and knowledge production in digital storytelling. She also applied digital storytelling in a project with the gender committee of a farmer’s organization in the the Colombian Pacific in the “Mujeres Pacificas” project.

Tania is currently collaborating with other UMBC faculty on three ongoing digital storytelling projects: “Moving Stories: Latinas in Baltimore” and “Honest Conversations” with Felipe Filomeno, Associate Professor of Political Science and Global Studies;  and “Intercultural Tales: Learning With Baltimore’s Immigrant Communities,” a teaching project with Dr. Thania Muñoz D., Assistant Professor in MLLI. The goal of “Intercultural Tales” is to create opportunities for students to explore their own immigration stories while “Honest Conversations” promotes conversations on race and immigration between UMBC students and members of immigrant communities in Baltimore.  Digital stories are used as a way of sharing some of these reflections beyond those involved in the dialogues.

I feel that research is usually associated with writing and especially when you’re thinking about doing structured research and only benefiting as a researcher from other people’s knowledge. I was interested in being able to give something back and I don’t think that it’s a very nice when you give something back like a journal article written in English to a community that doesn’t like read English. … So I thought this idea of creating audio visual pieces was like a good opportunity for collaboration and it was.(TL)

We wanted to do a service learning collaboration, but it ended up being something different, especially after the 2016 election. We realized that communities were so overburden with requests for stories, we didn’t want to go like, “oh, we’re talking about immigration, let’s send students to add to these additional moment of paranoia.”  We decided to encourage students to explore their own stories and the stories that were part of their networks instead of going to specific communities. … We realized something that is very common sense, which is that the university is not separate from the community, that we’re also a community and that we have networks beyond the campus. But at the time it was this huge discovery because what we were trying to do was to learn from students to value their lived experiences. We realized that a lot of them were first or generation immigrants or were part of communities of immigrants in one way or another.  So some students interviewed each other, some others explored their family histories or even their own stories of immigration. (TL)

Story Circle as a Parallel Collaboration

In some cases what I’ve been doing is kind of a dual collaboration process in which I have my own project [separate from what] participants are doing. They’re helping me in my project and then we have like a parallel collaboration in which they’re asking me to help them in something that they want to do. What I’ve seen is even when people are not necessarily super interested in the process, stories are very affective, stories are emotional and it creates a sense of solidarity. Even if you’re doing a one hour workshop in which people are sharing stories in a story circle, there’s something about facilitating people telling stories in first person, which is something that we don’t necessarily do in a classroom when we’re supposed to be experts or at least we’re supposed to name drop as a way to prove that we’re smart. I feel that there’s something that happens in terms of community building that doesn’t happen when we’re trying to just discuss academic texts. (TL)

What I realized is you need to show up and you actually need to be part of the community before you start asking people for their personal stories. … I like is to actually consider myself as a community member. And that means in the university, but also in the city where I live and also in my profession. And part of that is amplifying stories and amplifying knowledges that are not traditionally valued. I think that that makes conversations more interesting. So at least I see that as a way of challenging myself and realizing that I don’t know everything that I need to know.  I can learn from other people, and that includes my students. So I think that it changes the kind of dynamics of classrooms and even community engaged research when we consider storytellers as knowledge producers and not only as subjects of our research.(TL)

Part of what I’m trying to do is get to know people and all the amazing things they’re doing so I can actually like amplify their voices.   I’m not the only one. It comes from sometimes like a very selfish interest, which is basically, I don’t want to be the only one. And I think that’s like a motivation for community building.(TL)

I don’t want to defend digital storytelling or community engaged research as non-hierarchical  ways or very revolutionary ways of changing everything. I just think that they’re brief interruptions and that’s why they’re so useful. And that’s why like I’m very interested in them because it also challenges people to actually keep learning. I feel that as educators we need to do that constantly.(TL)

As a research method, I’m really attracted to these things that are not necessarily considered as valuable. And I feel that’s why people react so well to them. Every time that I show an excerpt of something that a student or I have made in collaboration with communities,  people are really touched by it.  It’s not because they’re really good aesthetically or because they have the best words, but it’s just because there’s this kind of affective element that makes people sometimes feel more comfortable. I feel that as academics and as professors and educators and even community members, we need to choose things that make people comfortable. Because we make people uncomfortable all the time and we are all suffering  from inhabiting spaces that are not made for us. So how can we make these spaces where people actually feel comfortable and want to tell stories.(TL)