Galina Madjaroff is a faculty member in the Erickson School of Aging Studies. She began working with digital storytelling in 2012 when she integrated the Charlestown Project into her First-Year Seminar (FYS) class, “Creating Stories about Times of Change.” This course explores common themes in adolescence and aging.  Students are brought together with seniors to create stories that focus on common threads, shared insights and lessons about growth.  Over the years she has expanded the program to include additional senior communities in the Baltimore/DC area. She has also evolved the course methodology to include longer-form documentaries that explore the fuller life stories of seniors. In this interview, Galina talks about the project and the innovative ways she has built on digital storytelling methodologies over time.

Over the past five years we’ve had some incredible stories told both from students and from our seniors,  stories about love and death and marriage and Holocaust survivors and some really incredible people who may have never told their stories to anybody else before us. We’ve compiled a beautiful collection of some really amazing stories.

As with the Charlestown Project, the FYS stories were created through a workshop process rooted in the StoryCenter model.  Story circles are a key early part of this process. Prior to meeting with seniors in the community, students created their own digital stories, giving them a chance to refine their skills and develop as a team.

We really made sure that the story circles were a key part of that interaction. Some of [the students] had experience writing, others didn’t…Some were really experienced with digital media and others really needed some coaching. But the teams that we created supported one another. The way that we use story circles was to have our students read what they had written loud.  The story didn’t have to be perfect. It didn’t have to be narrated in the best way, but really it had to be sort of, something personal, honest that the rest of their team members could really connect to. The idea was to give one another constructive criticism and to really think about what are some components that they could incorporate into their digital story that maybe they didn’t think about before.

One modification to the FYS process was in the role of the instructor as facilitator. Galina found that by stepping back and giving students more control of the process enhanced the story circle experience

It was a very productive time between the students to sort of help one another. In the past we had one of the faculty members or a teaching assistant be the lead for the story circles. But we found that when we left the students by themselves, they really felt comfortable to talk amongst each other and to give one another feedback.  We were there of course to support them, but we really kind of gave them the wheel.

In the early years of the FYS project students were encouraged to create short stories of two-to-three minutes. Technical production quality of image and and sound were stressed. Over the years working with the seniors inspired an evolution of this format to include much longer stories.

They really wanted to tell us more. They felt like three minutes wasn’t enough. In the beginning we were really focused on what are some important transitions in the older person’s life. The more stories we heard, the more we wanted to include. In the last couple of semesters we really expanded the stories to 25-30 minutes,  where it was often a story of someone’s entire life. They really enjoyed giving us that aspect instead of focusing on one particular story. The students also really enjoyed it…They ended up being a short kind of documentary.

The Story of Sy Bakker was produced in the 2012 FYS Charlestown Workshop.

A focus on aging

Over the years we included more aging topics. We really wanted to make sure the students kind of understood where this course was grounded. The digital component was really critical, but [so was]  understanding that generation. We would talk about the baby boomers and the greatest generation, depending on who was participating. We would really make sure that the students understood this person’s history and the sort of the narratives that they would bring to their stories. This made communication much better… All of those little changes that we incorporated had a really big impact on both the student and senior experiences.

A focus on communication

One important aspect was how to communicate with elders. We found that,  sometimes there would be a barrier … we would see a group of students, the elder would be sitting with them, telling them a story and a lot of them would be on their phone. We wanted to make sure that they understood this is a time to focus and really be present. We included an entire session on communication and how to communicate with somebody who grew up in a different generation and maybe is not be used to always being in front their phone or having someone always texting. That was really important and I think really beneficial to the students and weren’t offended, they didn’t feel criticized. They really sort of understood this is a time where I put down my phone and I focus on the story. 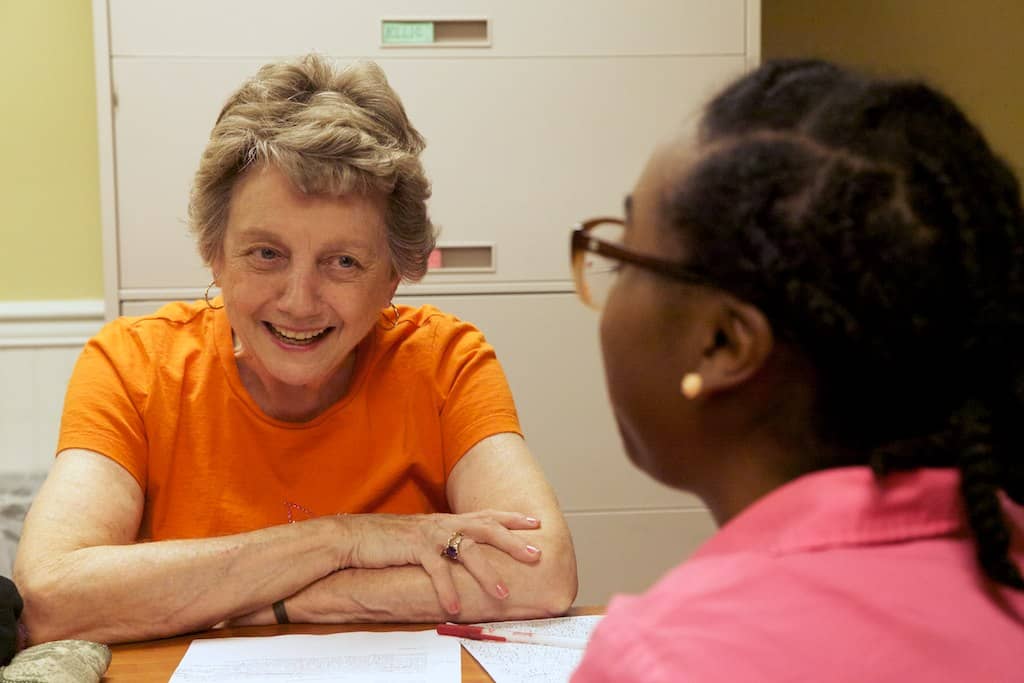 How do seniors benefit from the experience?

The seniors.. feel welcome on campus, which I think is really important.  They feel like they are listened to… We’ve had some seniors who really haven’t had the chance to tell their stories. We worked with an LGBTQ community and for some of those seniors that was one of the very first few times that they verbalize the fact that they had come out. [They talked] to us about the process and sort of how they felt. So it was a very personal, meaningful experience to them.

We’ve had student grandparents and very close families working together, which was also a really interesting aspect of the course.  We never turned anybody away if they really wanted to work with our students and tell their story.

We had a couple …the husband participated in our digital storytelling course, and he didn’t tell his wife. So this was all a surprise for her. She was invited at the end and tears were shed.  It was just a beautiful way to express his devotion to her. It was a wonderful gift to her, to him, but also the students.

My research was really influenced by listening to the stories. As someone who is used to doing interviews and qualitative data analysis and data collection, this course really inspired me to be a better listener and to think about how someone’s story has shaped their life. My research is so much richer now because I’m really much more aware of looking at the whole person and really listening to their story versus one very small aspect of their life. In particular, working with older adults with dementia, this has been really powerful. There’s  a lot of miscommunication and I think misunderstanding of those who have cognitive impairment. Just really thinking about, well, this is a person who had a story who still feels like they want to be heard. And so that was, that was really critical. Last semester we had someone with dementia who participated and this was a very inspiring moment. They did have some verbal issues, but were able to communicate with our students and tell their story. This was, I think really impactful for all of us who were a part of it.

We didn’t really face a lot of challenges, but some of the issues that came up over the semesters were competencies, student competency. I think we thought that  a lot of our incoming freshman were already able to use iMovie or Final Cut. But really we had to think about the fact that they didn’t really have a lot of background.  It would have been really helpful to have somebody with that knowledge base to teach them and really guide them through. After we lost some of the relationships on campus where we did have a lot of digital media support, we hired students who helped us train our class and support them in that way. But it was still difficult I think to kind of have those core competencies.

I think it would be great to have somebody with the expertise was part of the teaching team.  I think that would be really helpful. And somebody who’s always there . Obviously as a faculty member, I’m always learning and trying to support our students, but that would have been really helpful.

Logistics wise,  we’re working with human beings and so they get sick. Things happen in their life. And even though we try to be very good about making sure the students have enough time with the seniors,  sometimes that’s just not possible. We’ve incorporated Skype lately, whatever ways that we can sort of connect them to one another. I think it still works as long as they’re still communicating and sharing information and the students have all of the tools that they need. So a little bit of logistics,  a little bit of communication barriers that we’ve had to sort of get through. but in general nothing too major.

We’ve made a lot of community partners during our digital storytelling telling course.  We’ve worked with local communities, retirement communities where we’ve had participants from all the way from independent living to assisted living to those with cognitive impairment. We had a very diverse group of, of elders.  Those partnerships really were built on the senior having a great experience, going back to their community and telling others how much fun they had and how engaged they were and how wonderful our students were.

One of the things that I keep hearing is how amazing our UMBC students are and really how dedicated they are.  It has been really important to keep those relationships. The communities really feel like they’re really benefiting from this sort of living learning experience. One [community] that we’re working with in Silver Spring, are very much focused on research and having their community members be involved in research and interacting with  academic partners.

It’s also wonderful to work with some of our seniors in Baltimore.  We’ve had some low income seniors who’ve really suffered from social isolation and this project has really given them the opportunity to connect with others and really feel engaged.  I think keeping those connections is really critical. The challenge is a lot of those communities, in order to be able to make the case that this is really powerful and important, you have to get through the gatekeeper. Being part of the Aging department has been really key in keeping those relationships because  they have to see the value for their residents before they give you access to them. That has been really important.

Of all of the courses that I’ve taught at UMBC in the Aging department, I have to say that the digital storytelling course has been my absolute favorite. It really kind of comes down to relationships and building those relationships. It’s been a wonderful experience to see our students grow and really learn from our seniors and bridge that inter-intergenerational gap. I think a lot of the time we have way more in common with someone who’s 50 or 60 years older than us than we think. So I’m very proud of the work we’ve done and it has been a wonderful experience.